Sometimes It's Good to Sweat

Last weekend I was fortunate enough to be in attendance at 2719 Hyperion's first Sweatbox Meet.
It was great to have a chance to meet so many NC-area Disney bloggers, podcasters, artists, and enthusiasts.  Among those in attendance were:
After introductions came a wonderful presentation from Team 2719 Hyperion:
In true Sweatbox tradition, we were treated to a live reading that was a mix of preparation and improvisation, with questions and interactive discussions along the way.  You can see the fruits of their labors by reading the web version of the presentation (part one, part two).
After taking an interlude for refreshments, the team behind Progress City, U.S.A. took the floor and lead a lighthearted discussion with pictures and thoughts from their recent trip to Walt Disney World.  It was like being in the studio for a recording session of the Progress City Radio Hour - paying tribute to things that were As They Ought To Be, and pointing out those things which were not-so-much.
Both presentations were excellent, and complemented each other nicely.  One was rooted in the past, while the other was grounded the present day.  One was filled with meticulous research, while the other was infused with a light, extemporaneous quality.  Both were fueled by a common passion for Disney that really came through.
As I predicted, the first Sweatbox meet was an evening of first-class Disney Geek entertainment and a rousing success.
*Even better* is the fact that the date for The Next 2719 Hyperion Sweatbox Meet has been announced: 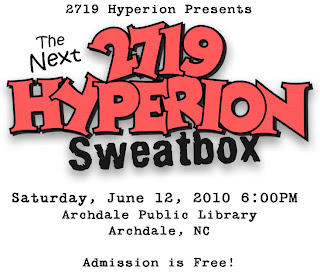 Unfortunately, I have a prior commitment which will keep me away, but I encourage all Disney fans in the NC area to attend if they can.
Thanks again to 2719 Hyperion for organizing the event, to Progress City U.S.A. for presenting, and to everyone who participated.  I had a blast.